Progress Report: The Video Poem and The Verse Play

- August 14, 2015
Toward the end of July, P.T. (pictured to the left, doing his tech thing) and I began work on our poetry video collaboration. We recorded the audio, then discussed various images and the sequence in the video, looked at some stock footage, brainstormed, etc. Last week, we met on campus with my little helpers, Miss Talkalot and The Boy, and we managed to film a couple of shots of them as the characters from my fairy tale poem, and then also some shots of the surrounding pine barrens, which are lovely.

This exercise is fun but strange and confusing. I have this idea of the poetry video as a piece of art unto itself, separate and distinct from a printed poem, but as we're creating this piece I feel like we're making a poetry video like people make music videos -- which can be an art unto itself but is also just as often a simplified representation, with visuals, of what happens in the narrative of a song. I'm really hoping to avoid the latter, but I'm not sure if we're going to get there, to that place where the video poem is lyric and metaphorical and something beyond illustration. 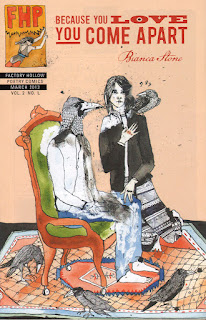 Ultimately, I'm looking to Bianca Stone's work with Because You Love You Come Apart for guidance, which began as a poem she illustrated (she's a graphic artist as well as a poet), and then morphed into the video. We're two very different poets and I have a feeling that she created her video entirely on her own, without collaboration, so her video is going to be extremely different from mine for those two reasons alone (let alone the myriad other reasons). However, I also get this sense that she totally knows what she's doing -- there's a vision here. The video isn't just an illustration of her language. Rather, language and visuals combine to create a new message, new meaning.

I'm   . . .  not sure that's going to happen with this, my first attempt at a poetry video. I don't even know if there will be a second! But I wanted to try it.

For now, P.T. has the footage in his office and he's going to work on arranging the shots like we discussed and then we'll see how it all turns out. If it's good, I'll link to it here and share it a little on the internet. If it's not that great, I'll show it at the college (which I need to do as part of my professional development) and then either try something new or just put this poetry video venture behind me. After all, it's not like I don't have other things to work on!

Speaking of those other things, I spent most of last week's writing group time working on the verse play, which felt really really good. Then, this week, I read over last week's chicken scratch in my notebook and I'm not sure that any of it is worth keeping. I don't know if that three hours was time necessary, like I had to get that nonsense out of my system, or if it was just a futile attempt and a big waste of time. Either way, I'm not getting those hours back, and as the first day of the fall semester approaches, I feel more and more like each hour spent on my own writing -- and not writing dictated/required/asked for by other people -- is precious.

Also, it's taken me almost three hours to write this stupid entry because Vampire Toddler woke up early and Writing With Kids Around is nearly freakin' impossible. Particularly when Vampire Toddler is one of those kids. Oy.

Poetry Video The Verse Play Writing With Kids Around