Showing posts from September, 2016
Show all

Come to This Reading I'm Hosting. Or Not. 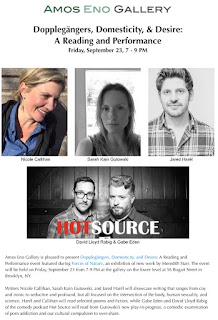 I'm in a weird head-space. Tomorrow I'm hosting and taking part in an event that feels much bigger and important than it really is. Maybe this is because I haven't organized a reading or participated in one for a long time, and maybe this is because there will be people there (friends, colleagues) who haven't read or heard my work before, and maybe this is because the work I'll be 'presenting' -- it's weird using that word -- is so unlike other work I've put out into the world. It's two scenes from a new play I began this summer, and it's being read by two people who aren't me, and it's a comedy, and it's not written with poetry, and it's crass in a way that makes me feel really vulnerable -- because I fear that it will be too crass for some of the audience, and really not enough for others -- I don't want to push boundaries in a half-ass way, but I'm probably going to offend some people and I just have to get over
Post a Comment
Read more
More posts