Showing posts from August, 2015
Show all

Mad Preparation for Fallpocalypse (Teaching in the New Semester)

- August 21, 2015
This past week has been devoted almost entirely to preparation for the new semester of classes and committee work, with little writing. But SOME writing. Just not enough. And then some (maybe too much) following on Facebook and Twitter this insane shit-storm surrounding AWP and its conference proposal selection processes. And I'm lurking where that's concerned, listening, not participating, but it's still kind of exhausting. I'm looking forward to finishing the prep for classes, which I've been doing with a kind of head-down, stubborn relentlessness. I've been trying to put all of my prompts for in-class writing, and quizzes, and essays up on the Blackboard course spaces so that I can, more or less, be ultra-prepared in the classroom instead of -- as happens quite frequently -- arriving at the classroom only to realize the quiz or the handout I wanted to distribute is back in my office. Also, there have been semesters where I've begun teaching a class
Post a Comment
Read more

Progress Report: The Video Poem and The Verse Play 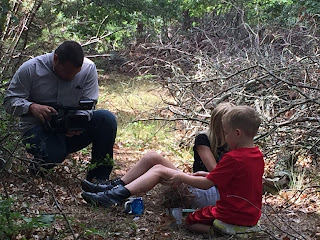 Before The Boy became bored and stopped cooperating. Toward the end of July, P.T. (pictured to the left, doing his tech thing) and I began work on our poetry video collaboration. We recorded the audio, then discussed various images and the sequence in the video, looked at some stock footage, brainstormed, etc. Last week, we met on campus with my little helpers, Miss Talkalot and The Boy, and we managed to film a couple of shots of them as the characters from my fairy tale poem, and then also some shots of the surrounding pine barrens, which are lovely.  This exercise is fun but strange and confusing. I have this idea of the poetry video as a piece of art unto itself, separate and distinct from a printed poem, but as we're creating this piece I feel like we're making a poetry video like people make music videos -- which can be an art unto itself but is also just as often a simplified representation, with visuals, of what happens in the narrative of a song. I'm rea
Post a Comment
Read more

What I Read When I Should Be Doing Other Things

- August 05, 2015
Still not much to say. Juggling many different projects, and not well. I think I should just accept that I am a writer like I am a reader of books; one at a time, and slowly. I'm really good at reading essays and poems on the internet, though. How much of my life has been spent falling down rabbit holes, I wonder? Anyway, here are two of the latest: 1) The Mezzo Cammin Women Poets Timeline Project: I just discovered Mezzo Cammin, the online journal of formalist poetry by women, and then I tripped onto their Timeline Project, where they archive lovely little essays/introductions to poets like A.E. Stallings . 2) On the complete opposite end of the spectrum, experimental and not linked to form, is this "thin narrative in fragments." Lisa Ciccarello and Emma Trithart, the poet and artist respectively, call these ".gif poems." I'm in love with how this is so playful and yet so dark at the same time. The project is different and risk-taking and Num
Post a Comment
Read more
More posts