Showing posts from October, 2011
Show all

- October 27, 2011
Three of my poems have been accepted for publication in the Spring 2012 issue of The Southern Review. I am over-the-moon-giddy-happy-happy happy.

My husband thought I'd set the house on fire from the way I came running down the stairs to tell him the news.

So please excuse this little bit of celebratory nonsense -- I don't mean to brag. I realize that this is my second acceptance since I began this blog, but this year ended an eleven-year dry spell where publication was concerned . . . so, you know, I'm kinda excited.

And, just by way of a disclaimer, I've also received ten rejections since I began writing this blog (in July). I accrued many many many many many rejections in that aforementioned dry spell, and I have a slew of submissions out there that will probably be returned with similar, small, impersonal rejection slips.

I guess that's my way of asking that you not hate me for indulging in a little interweb gloat.

- October 20, 2011
1. Dare to Love by Eliana Osborn. This has a lousy title (it reminds me of an eighties rock ballad album), and I think that some of the writing feels . . . distrustful? . . . (the short, staccato sentences, namely, that infuse the writing with drama when the situation really doesn't need to be infused with drama). So why would I suggest you read it? There are also some beautiful, devastating, brave moments in this essay -- both in subject matter and in craft.

2. A Soft Wife by Ruvanee Pietersz Vilhauer. I'm totally jealous of people who are talented at both writing and some other completely different field, like quantum physics. Vilhauer is not a quantum physicist, but she's a mother and a wife who teaches psychology at a small college in New Jersey, so she still earns my envy, because she can write a story like this while doing all of that.

3. What to Eat, What to Drink, and What to Leave for Poison
By Camille T. Dungy. Courtesy of the Poetry Foundation's Poem of the …
Post a Comment
Read more

The Necessity of Feedback

- October 18, 2011
On Friday I finally met with A.P., after what seemed like an eternity, to discuss poetry, and more specifically, our poems. Really, I should say that we met to discuss our poems, and that a more general discussion of poetry developed from our responses to those poems.

I have other friends who write poetry who, in turn, have other friends who write poetry also and with whom they conduct weekly or bi-weekly or monthly or yearly workshops. There was an article in Poets & Writers (this month's issue) about the importance of writing groups, but I'm sure most people missed it because this was also the issue in which they posted the oh-so-controversial MFA Program rankings. (By the way, the editorial in Slate that I've just linked to is about as bogus as the rankings themselves -- enjoy!)

Ah, yes. The column in Poets and Writers by Ann Napolitano was a nice account of how the novelist has continued to maintain her friendship and writing relationships…
Post a Comment
Read more

The Lazy Girl's Guide to Fact-Checking 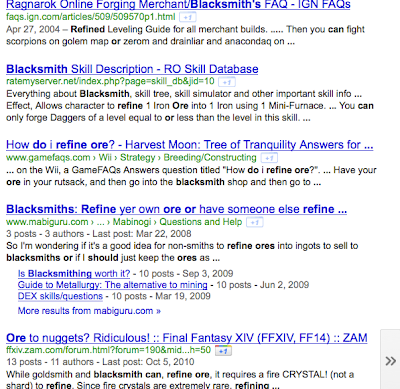 So I'd intended for my next post to be a little mini-essay about workshopping and having writerly friends who help you do writerly things, but I've been having a good poetry-writing day that I didn't want to interrupt, save to share with you this little gem:

Because my fairytale poem features a blacksmith, I ran to Google and attempted to do a little fact-checking.

This is what I found:

I think I might have to bypass Google and go to the college library's collection of online databases if I hope to accomplish anything other than winning a video game today, or winning at D&D, or whatever the f**k these people are doing that so wonderfully and ridiculously clutters up the interwebs.

- October 14, 2011
The week will end on a stronger note than it began. I've managed to finish one revision of an old poem that actually has a place in the new manuscript -- in the myth section -- and this morning I found a scrap in my old journal that made its way into being an actual poem for the fable (pig poems!) section. Of course, time will be the real test and may prove that these pieces don't belong anywhere near the MS -- the sow poem in particular, since I'd considered that section pretty much finished. But right now I'm optimistic, which is nice change from the beginning of the week and my last post, eh?

The 27th of October is mid-semester at the college, (and my sister's birthday!) which will mean that my sabbatical will be halfway over at the beginning of November. If I'd kept to the original schedule I set out for myself, the MS would have been complete in September and I'd be immersed in writing my play right now.

A Morning Filled with Doubt 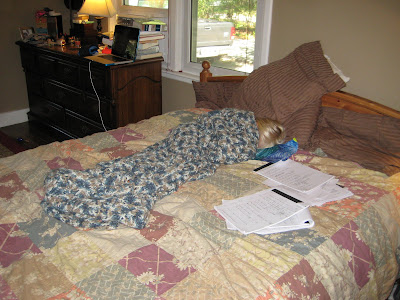 This is not a good way to begin the week, I suspect.

Last week was a major hiccup in the writing/sabbatical process. The Doodle became sick with a fever around Monday evening -- and so he was home from school until Thursday, and I didn't get much accomplished on Tuesday and Wednesday. I struggled with revisions of old poems in between playing with Legos and completing puzzles with the boy, so there was some writing done, although honestly I don't know how productive it was. My major accomplishments ended up being 1) lit-mag research -- I found some really interesting new magazines (more on them later) 2) submissions and 3) the organization and "clean up" of my computer files (I had multiple drafts of poems saved between my laptop and my zip drive, and this clutter was a source of major confusion lately).

I had about one day of good writing -- Thursday -- and, true to form (no pun intended), I spent the entire day focused on working out a stanza to one of the "m…
Post a Comment
Read more

This Needed a Title, So Here it Is: Interweb Show and Tell

- October 03, 2011
I hate to be a Debbie Downer so early on a Monday morning, but this article by Ann Larson on contingent faculty and the money machine of academia is really fantastic, albeit grim.

So . . . no writing done during "quiet time" this morning, but there's still the rest of the day left . . . although I do have a committee meeting this morning. (It's for the committee that's charged with developing and overseeing the creative writing curriculum and emphasis, so it's probably in my best interest to be there, if I want for the college to regard my field seriously and with some modicum of respect.)
Post a Comment
Read more
More posts