- April 13, 2012
I suppose I'm feeling guilty lately because this blog is supposed to be about that weird, manic intersection of teaching and writing and raising children, but when things get particularly busy at school the writing and even, yes, the raising children parts seem to get less of my attention. It feels like my life is less and less of an intersection of these things. Instead, issues at the college take up all my concentration and those issues aren't even about teaching. I haven't known what to write about in this blog and so I haven't written, period.

And then I realized last night that these conflicts, these issues at work, seem so large when they first occur -- problems with students, problems with other faculty, problems with the bureaucracy of the college -- that my little peanut mind shivers inside its shell and kinda shuts down all of the parts (the miniscule little peanut parts) that could possibly deal with anything other than that "big problem".

Or, if you imagine the mind is more like an eye, complete with an iris and a pupil, and the pupil of the mind expands and expands when confronted with the darkness of the problem, so much so that there's only a thin band of iris left around the pupil, so the eye/mind is just this big black hole searching for light and it takes the eye/mind a while to realize that there is light, it's just not as bright as it once was, and so you have to adjust and bump your knees against some furniture and step on some loud, blinking kids toys as you wait for your eyes to get used to the less-light-but-light-nonetheless of the room.

That was kind of like my day yesterday, and the day before. A rash of bizarre "crises" popped up this week, and I've been trucking along and dealing with each one as I can, in my limited and inexperienced way, but it's been a little disconcerting. I need to grow a thicker skin. I need to leave my work at work and be more mindfully at home when I'm at home.

The only problem is that yesterday I worked from my home because the little guy threw up the night before (we suspect it was the result of something he ate, rather than a flu, but I had to keep him from daycare nonetheless). The entire day was filled with my compulsive checking of email and lots of writing of emails and waiting for responses to those emails and then responding to those emails and I kinda want to throw my laptop across the room now. And I'm sure my children would like to do the same, as they didn't much attention yesterday (and when they did, it was to tell them to stop kicking one another or teasing one another or leaping off the couch.)

So there you have the only real writing I've done this week. And it's a bizarre ramble about eyes and peanuts when I could have just tried to work on my revisions. Or my essay/post about manuscript critiques and revision (it's coming! at SOME point!).

I did manage to send out another submission this week, and I learned that the summer issue of the Gettysburg Review will be out within a month (with two of my poems in it!) so there's some good news.

I'll leave you now with this picture: 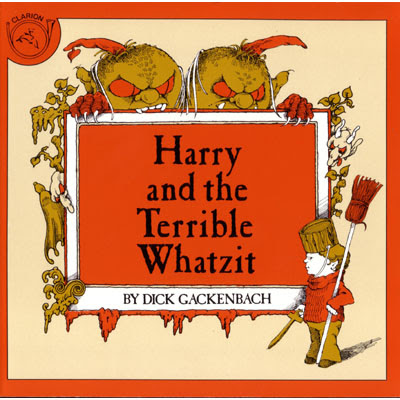 This book was one of my favorites growing up and it's now a favorite with my children, too. I post it here because I need to be more like its hero, Harry. Harry does battle with the terrible Whatzit, a two-headed creature that lives in the cellar, because he believes the terrible Whatzit has done something terrible with his mother, who disappeared when she went into the cellar to fetch a jar of pickles. As Harry battles the terrible Whatzit, he becomes less afraid of it, and as he becomes less afraid of it, it shrinks. In the end it becomes so small it disappears. And as it's disappearing, Harry says that the Whatzit should try the house next door, where Sheldon Parker lives, because Sheldon Parker's afraid of everything.

So that's it: I'm going to tell all of my problems to try the office next door! Lesson learned! HA!