- December 01, 2018
Kristy Bowen, founder, editor, and publisher of dancing girl press, wrote this blog post about her writing habits since earning her MFA, and even though Bowen and I lead very different lives in terms of particulars, I found this passage resonated with me especially:

Other related things were happening during this time--girl show, my thesis mss, which was rendered adrift when Ghost Road went under in 2010, was picked up by Black Lawrence and slated for publication.  Noctuary solicited shared properties... and released it in 2013.  The JF poems were a huge success when Sundress published them as an e-chap.  All of which drew me out of the funk I'd been in for awhile and made me less likely to doubt my commitment to sparkle motion. I felt more like a poet again--so I guess I started to act more like it.

But even still that pace, since around 2013, has been much slower and less productive than this year all by itself, and I feel like it's for a very simple and rather uncomplicated reason.  I spent years, my days filled with so many other things--commutes and studio work, the library, then home, then sleep and the whole time writing was this thing that I MIGHT get to before bed, but sometimes exhaustion or distraction won out.   It was also hardly the idea brainspace for concentration or creativity. It rarely happened, or if it did, it was uninspiring.  More often the productivity came in spurts around my own deadlines for things when I buckled down and devoted panicked chunks of time to things. I'd then end up writing like 10 pieces in 3 days, and entire chapbook series in a week.  All [very] nice, but not very sustainable.

It is so very much easier to "act" like a poet or writer once you feel like a poet or writer -- i.e. when you have the external validation of publication. I wish that wasn't true, but it is. Of course, in some ways, it's the easy way, the "lazy man's way" of writing. The external validation is a shortcut in the path to self-esteem that's large enough to incorporate a regular writing practice. Honestly -- I'm beginning to think that I resisted setting up a regular writing practice -- these morning writing sessions -- because I didn't feel like I deserved them. Sometimes I still don't. But lately I tell that part of myself to fuck off and I go back to the page.

This week was a bit weird in terms of writing. I did some revision, a little bit of drafting, but zero new poems were written, which might be the first week that's happened since this summer. (Which signifies . . . something? Nothing? Not sure.)

And yesterday's Long Form Friday began a bit late and involved more research than actual writing, but it was all in service of my play so, in the end, at least good work was done there. I even reread the first pages of my play and discovered a necessary character change, which is a "big" moment in the writing process and will help determine the end of the plot, so that's kind of an accomplishment, too.

My attempts to keep my writing-during-the-semester on track seem a bit thin and flimsy, though; grading is encroaching in a big way, and it's frustrating because I can't get work back fast enough to satisfy either the students OR myself but I also don't have new poems to show for it. I think it's making me cranky. 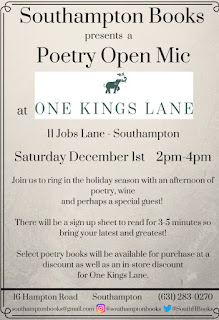 Today I'm taking Little Miss Talkalot the Second (Formerly Known as Vampire Toddler in this blog) to Kindergarten Basketball, which is absolutely as ridiculous and adorable as it sounds, and later going to a bookstore event in Southampton (in a furniture shop? Hamptonites are so weird) for A.P., who is reading from his gorgeous new book of poems, Talk of Happiness. Somewhere in between there, some grading. And, perhaps, figuring out the mysteries of Microsoft Word and how to add Act, Scene, Page to my document (also something that sucked away time on Long Form Friday).
Adam Penna Grading for Days Kristy Bowen Long Form Fridays Playwriting Poetry Productivity Talk of Happiness Validation as Permission to Write Writing Practice