Sunshine and Blue Sky, Tsvetaeva on the Concurrence of Souls, and the Art of Letter Writing

- March 04, 2018
This week I'm late to the blog. I was late arriving to Florida, too -- I was supposed to arrive Friday with my children but we were unable to fly out until Saturday because of the Nor'easter. Other than our travel plans being interrupted, though, we were lucky. Long Island was hit with some rain and wind but nothing catastrophic. Nothing like what's being reported in other areas of the country. 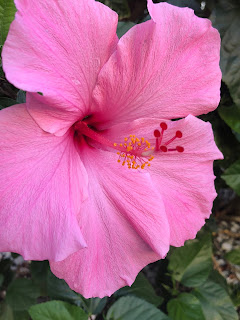 It's kind of guilt-inducing how nice it is down here. Windy and a touch on the cool side, but I'm not complaining. After the oppressive cloud cover of the last week up north, it's rejuvenating to see clear blue sky and sun.

A. met us at the airport, and now we're all ensconced at his parents' condominium for the next few days. On Wednesday A. and I will leave for Tampa so I can attend AWP and his parents are taking the kids to Disney for two days and a night. (They are brave and maybe foolish grandparents -- do they know what they are getting into? -- but oh so generous and loving. The kids can't wait.)

In this week's journal-revisitation, I'm looking at some very few quotes from Marina Tsvetaeva. At first I thought I pulled them from Art in the Light of Conscience, a collection of essays on poetry by Marina Tsvetaeva published by Bloodaxe Books. I was first introduced to Tsvetaeva by a good friend who recommended Letters: Summer 1926, which archives the correspondence between Tsvetaeva, fellow Russian author Boris Pasternak, and Rainer Maria Rilke. I loved this introduction to Tsvetaeva and her quick mind, as well as her passionate personality with all of its flaws. I read Art in the Light of Conscience next, and spent many weeks reading those essays slowly and carefully -- but my notes on those essays are in another notebook somewhere. These two scraps, followed by a quote from Ariadna Efron about her mother's writing rituals, more likely came from a feature in Maria Popova's wonderful blog/newsletter/living document Brain Pickings (which has directed me to so many wonderful books and podcasts and the work of various creatives and thinkers):

"Creation is shared work by isolated people," Marina Tsvetaeva from "The Epic and Lyric of Contemporary Russia" (printed in Art in the Light of Conscience)

"For complete concurrence of souls there needs to be a concurrence of breath, for what is breath, if not the rhythm of the soul? So, for humans to understand one another, they must walk or lie side by side," Marina Tsvetaeva, "On Love"

"Answered letters right away, writing her response upon arrival. Saw her letters as a craft almost as necessary to her as her poems," Ariadna Efron about her mother, Marina Tsvetaeva

Tsvetaeva's connection of the body to the mind is something I clearly identify with. Two weeks ago Bekah Steimel kindly featured me on her blog, and in that interview I wrote about Anne Sexton and how her own identification of the body as something integral -- not just adjacent -- to one's psychological and intellectual makeup was something that spoke to me from a very young age.

Also, Efron's description of her mother's commitment to letter-writing makes me wistful for my time in London, following my graduation from undergrad, when I procured a student work visa and lived in the city for six months. During that time I wrote letters to C.K., and he responded, and our correspondence was just as Efron describes it -- C.K.'s letters an extension of his burgeoning journalism career and my own letters a sister-craft to poetry, more like essays in some instances, but always with an acute attention to my audience and a need to write something interesting, entertaining, and meaningful.

Emails sometimes approach this now -- but I have this kind of writing relationship with a very few people -- less than you could count on one hand. A.P. and I used to exchange email letters about poetry and craft around the time I had Little Miss Tween. I was secluded from society and work and the world, hunkered down in a summer of new maternity, but writing occasional new poems filled with the imagery of the pine barrens and then sending them to him for his considerate feedback. He'd send me his, and I'd respond in kind. We were probably better friends back then, and not least because of the letter writing.

It's sad (but perhaps natural?) how much communication can suffer even, or especially, when we're in the same room with another person. Letter writing is an art that is so necessary -- and so rare. Just reflecting on this makes me feel like I should devote more time to it. But with whom? Who would take the time to answer? Blogs are a form of letter writing to the world, to the universe, to the ether, I suppose, but I still like the particular audience, the fully imagined and/or perhaps fully realized Other, the best. Waiting for The Other's answer makes one feel on edge, more alive -- and receiving that answer is always satiating, thrilling, and the opportunity to craft a response worthy of The Other's attention. A challenge. (The good kind.)

- November 06, 2018
We interrupt this regular week of drowning in grading (but still writing poems in the morning, because stubborn) to make the following announcement: ALITALIA FOUND MY LOST LUGGAGE, YA'LL. IN PALERMO. SUPPOSEDLY IMMA GET IT BACK. I mean, we'll see it when we believe it, ammaright? Or some such nonsense. I may be giddy from lack of sleep, or the adrenaline rush that occurs when one receives a call from Sicily. Anyway, that's all for now. I'll post pictures if/when the prodigal son of suitcases makes its return to New York.
Read more

The Black Mood and Blue Funk of Post-Deadline

- June 24, 2016
I took the week off from writing. More or less. It began promisingly with a lunch date with A.P. to discuss our projects (his novel, my play) and then took a big nosedive from there. After last week's frantic and frenetic push to meet deadlines (the A-form for my final promotion, a somewhat-workable draft of the play for July's script development lab) I think I needed a solid break. Not that I can afford to take a break at this point. The graduate class (and script development lab, and conference) begin July 6. I'm going to have to use this weekend, and next week, to get some serious work done. I guess there are two things that left me needing the break and also just kind of deflated me: one, I turned in my promotion paperwork and instead of feeling elated and happy because it's (supposedly) the last time I'll have to go through this process, I felt deflated and weary. And then I found out that my application was far less substantial (like, it probably wei
Read more