Being Productive, Present, and Listening to Podcasts

- June 02, 2017
I'm now two weeks into the summer "vacation" and one week into teaching my summer literature course. Already I have little moments where I fear this precious, non-rat-race time is almost over, but overall I'm trying to stay level-headed and calm and be productive -- simply because if I can do good, earnest work over the next month -- prepping for fall classes and taking care of lose ends for the creative writing festival and the literary magazine I advise -- I'll be able to be present, and relaxed, during the entire months of July and August, and hopefully be more present, and more relaxed, than I ever have at the beginning of a fall semester.

I've said it before and I'll say it again: It's probably a pipe-dream, but it's my pipe-dream, man.

Now that spring grading mania is over, I'm returning to things that I attempted to make regular practice but were elbowed out of the way when shit got real (and by "shit got real" I mean "all of the grading I'd put off because of mid-semester class prep and meeting bullshit was suddenly due"). This week I've begun again my daily early-morning writing practice (last week I allowed myself to sleep), as well as going for runs -- one on the treadmill, one on the road. I have plans to go out this morning with my sister, who -- with a one year old son and four hours of commuting every day -- is feeling the need to stretch her legs, unencumbered by either infant or the soul-crushing train schedule. Still, I think she's glad -- and I know that I'm glad -- she's able to live so close to me now, even though it necessitates a soul-crushing train schedule. Because on Fridays she works from home, and we can go for before-work runs. (And drink after-work wine together at one of our houses while my kids play with her baby. Yay suburbia!)

It also makes me miss my youngest sister. Just thought I'd put that out there.

I've been listening to more podcasts on my brief commute to and from the office. Have you ever heard of the Design Matters podcast? It's one of my favorite things: Debbie Millman interviews some of the best, crazy-talented people. This week they streamed an archived episode with the composer Nico Muhly and he is one of my new favorite creatives. He's prodigious: young for the amount of accomplishments under his belt and the sheer volume of work he's produced. He's also whipsmart and funny and charming -- he speaks a mile a minute during this interview, but he says things that really resonate with me about the act of creation. I have to say it in that kind of vague, pretentious-sounding way because he's speaking very specifically about music and composing, but much of what he says could be applied to writing, and, quite probably, painting or sculpting or knitting or woodworking or whatever art receives your devotion and regular practice.

Also, I love how he's a fan of other composers, other art-makers. It's clear after listening to the podcast and reading some of his blog that this is part of his aesthetic, his world-view: that not only is it important that you share your enthusiasm for other's work with the world, it's vitally important that you have that genuine enthusiasm for other's work in the first place, and that you actively work to foster that enthusiasm alongside (or as part of) your own creative work. I feel some kinship with him in this way -- and also with his writing style (as evidenced by his blog/website). I'm going to begin downloading his music and listening to it today -- even if it's not my thing, I want to understand where he's coming from, what he creates.

I'm determined, as well, to catch up this summer with the Commonplaces podcast, created and hosted by poet Rachel Zucker. It's more conversations with people about the craft of writing and what they're reading and how they approach art and life, etc. From the episodes I've listened to so far, I find that even if I'm not a big fan of the featured author, I still find Zucker's interviews with them interesting and enlightening. Just because we don't share a similar aesthetic doesn't mean they aren't really fucking smart and eloquent and knowledgeable, you know?

There's another podcast, too, called Handful of Wheel (hosted by Maura Conley and Haele Wolfe)  that focuses on interviews with creative-types and people Who Do Things and for some reason they consider me a person Who Does Things (occasionally). The episode went live today, and if you're interested, you'll find it here on SoundCloud and also on iTunes. 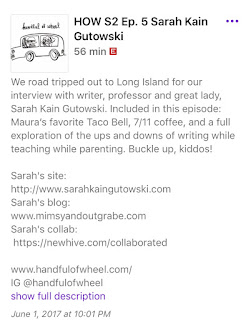 The Handful of Wheel podcast is unique in several aspects -- one, they interview a lot of different creative types, from bakers to comedians to movie-makers to writers. Two, they record their interviews while driving around Brooklyn in Maura's van (mostly -- generously, they came out to me on Long Island for our episode). Three, they provide these crazy "residencies" where they will drive you around the Brooklyn/Queens area listening to a playlist of your favorite music. Maura teaches, has a young family, and writes fiction. Haele is a visual artist and filmmaker with a film being released this summer. I have no clue how they make the podcast in addition to All the Other Things. They should really do an episode featuring themselves.

Also in good news: I had one of the fairy tale poems and one of the sow poems accepted by the fabulist journal Phantom Drift, and they'll appear in their annual issue this fall.

Today I was supposed to meet up with some friends and colleagues to commiserate/celebrate the end of the semester, but those plans have been postponed. I have no end of things to do in place of that, of course -- so today shall be spent bouncing around between reading (there's so much I don't know where to begin), cleaning (yawn -- I know, boring but necessary), and working on class prep.

And spending a lot of time outside, now that we finally, finally have some nice weather.