Last semester I managed to carve out time during the morning to read and write, and that was going swimmingly for about, oh, the month of September, until the inevitable grading and committee-work creep took over, and then I didn't write much at all. There were occasional two-hour spans of time during October, November and December as part of a program I organized at Stuffolk through our faculty union -- and these sessions were good and productive, but I spent most of that time sending out submissions or writing things for the college, and not doing any genuine creative work -- or creative work that I found, well, satisfying.

And, as you know, that's not great. Particularly if I would like to keep calling myself a writer.

But -- in the moments in between papers, or driving from one campus to another for yet another meeting -- I thought back to the last two times I made any serious progress with my writing. One was in September, when I had a hard, intractable deadline (for the reading of the first scenes of "Accountability Partners" at the Amos Enos Gallery). The second was in May and June, when I had a few weeks between the spring semester and the beginning of the Last Graduate Summer Course I'll Ever Have to Take for Promotion. (And actually, when I think about it, those summer weeks involved a deadline as well, or TWO deadlines -- one for my initial submission to the Script Development lab, and the next for the final "staged" reading in the Script Development lab.)

Anyway, I came to the following conclusion: I really need to give myself two things if I'm going to finish these existing projects and/or start new ones. First, I need deadlines with external accountability. Like, I need someone outside of my own fucking crazypants head to know what I'm doing and when I'm doing it and when I anticipate finishing the thing. And two, I need to carve out space that is finally, fully, and in no uncertain terms inviolable when it comes to work and even social obligations. No emails, no phone calls, no work on projects I should have finished last month -- just work on my writing. Treat my writing like I treat my day job -- treat my writing like it is my day job. Last summer, when I dedicated a few weeks to such a plan, I called it a mini-sabbatical. Now, to kick off the New Year, I'm going to take a micro-sabbatical.

Because it's going to be just four days long. Because that's all I can afford to give it right now, in between semesters, and especially when I have a busy and obligation-filled semester coming up. I put an outgoing/away message on my work email account. I kept my calendar clear from 8:30 a.m. to 3 p.m., when the kids come home from school. (I actually postponed and refused to schedule work meetings for this week -- that was a big step for me!) I'm ignoring certain household calamities and putting off room-rescues until the second week of the new year -- just so I can have four days that are devoted to this -- writing, writing, writing -- and writing in various forms, but writing nonetheless.

One of those forms of writing -- in addition to the plays -- will be this blog. Last time I took a true sabbatical, one paid for by the college, official and scary in its official-ness, I started this blog in earnest. I began at the suggestion of my colleague and friend A.P., who had done something similar during his own sabbatical in a previous semester, and it was really helpful in keeping a record of my progress during those many months. When the sabbatical ended, I had fodder for my official sabbatical report (hello, external accountability!) and also I had an archive I could return to when I had concerns about when or why I'd made particular choices in my writing (like my decision to hold off on the verse play and write a fairy tale in metrical verse first).

So there's going to be a small influx of blog posts over the next few days. Here's your heads-up. I spent yesterday creating an actual micro-sabbatical plan, or outline, for what I hope to accomplish, so: Day One complete. (I came up with that idea last semester, too -- it's funny how stress over grading will make one think about almost anything else but grading.) Anyway, today is Day Two. Day Two involves recording yesterday's progress on the blog (as well as giving it context, otherwise ya'll would be like, what's this chick on about?) and also writing a new "treatment" for the verse play just like I did during the summer, which turned out to be immensely helpful and also another good idea of A.P.'s. (Thanks, dude!) 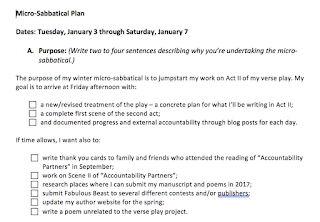 Day Three and Four, Thursday and Friday, will be to work on writing the first scene of Act I. If I get more than that, yay! But my goal -- modest, I think -- will be attained, and that's important -- really important -- if I'm going to maintain any kind of writing momentum into the next semester.

Day Five is kind of extra -- Saturday I plan to write a quick wrap-up post to reflect on whether or not the whole venture was successful.

For the record, part of me looks at this mechanization of the writing process with a kind of horror and revulsion, as if writing should happen in a much more organic and inspired way. I wish my writing life could be like that most of the time, I really wish it could -- but I've got three children, a husband, and a career that helps keep us fed and sheltered. For years now I've been trying to make writing fit into my life the way I think it should, but not the way it can, realistically. People who are independently wealthy and/or not primary caregivers are the kinds of people who can devote, daily, hours and hours to writing (if the 20th century has shown us anything). (And as long as we're not Lucille Clifton, that superwoman.) I'm not gonna suddenly become rich, nor will I ditch my kids and career to write poems. But I'm not going to ditch the poem-making, either, and this, so far, is my answer.

Whether or not anyone actually cares that I'm writing poems (see: 2016 was The Year of Rejection) is a subject for a later (maybe never, 'cause wassup, self-pity?) blog post.