This Week: Published Poems and a Poetry Video (Not too shabby!)

- October 16, 2015
Two things, my lovelies, and then I have to take Vampire Toddler to the doctor for a Mystery Rash. AND find someone to cover for me at work today. My life is nothing if not exciting.

The fall 2015 issue of the online publication Menacing Hedge was released on Sunday, October 11. It includes five chapters of my fairy tale poem as well as three of the "conversation" poems that interrupt the narrative between chapters. Kelly Boyker is an amazingly generous editor and I'm thrilled that the staff gave my poem so much space in their magazine. It's really gratifying to see this work out in the world, too. I'm still making my way through the rest of the work in the issue, but I'm quite in love with the conversation between Sarah B. Boyle and Sonya Vatomsky right now. It reminds me of the "interviews" in BOMB magazine, which I've loved since my undergrad days: two artists speaking with one another, people who are more or less sympatico. (Not a journalist with minimal background knowledge asking one-way questions of a "star" artist. A real conversation about the making of art between people who make art.)

ALSO out in the world this week is the poetry video I made with my colleague Paul Turano, "But Mama, Why Do We Remember?" It's made from a poem that was published in So To Speak this spring, and it is one of the "conversation" poems I mentioned above -- it interrupts the fairy tale in my full-length manuscript. At the talk I gave at the college alongside A. this week (Wednesday), I said that this poetry video falls short of what I wished I'd been able to do, which is create a video poem -- something that feels necessary to the medium and whole and complete and the result of a singular vision. Right now, it's kind of just like those music videos on MTV back when MTV actually played music videos: A visual representation of the song. (Btw, does ANYONE play music videos anymore, aside from YouTube?) Even still, it was a lot of fun to do something different, and to do something collaborative, even if P. was sick of me showing up at his door or over email with "one more request." Also, Little Miss Talkalot and The Boy star in the video, and they were allowed to play truant from school and attend the talk and see the debut/premiere of the video, so that makes the video particularly dear to me, even if it didn't turn out exactly the way I'd hoped!

And now I leave you with some pictures of my dogs: 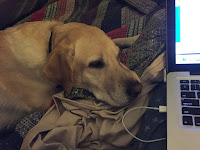