- May 22, 2015
It's been a week of recovery! And Plan-Making Lite, meaning that I'm beginning to think of the best way to tackle all of the things I'd like to do with these next few teaching-free months. My summer class was under-enrolled and didn't run, which is probably more good fortune for me than bad: I'll have less money, but now I can use the next month (the one where my children are still in school) to do prep for the fall at a leisurely pace, and to work on the things that I'm feeling starved for, like reading and writing. And exercise -- even the simplest kind, such as walking through my neighborhood or stretching. And sleep. Lots of sleep.

I've begun reading this week, as a kind of segue between Disaster Semester and Disaster Semester Prevention Planning, Lynda Barry's Syllabus. It's really marvelous. Lynda Barry is one of my new favorites. I discovered her via my colleague D.W., who studied with her at University of Wisconsin-Madison (and is actually in a class photograph in the early pages of Syllabus). When I bought Syllabus early in the semester, I skimmed it and discovered that the composition notebooks she requires of her classes is close to the Commonplaces Book A.P. and I have been requiring for our Effective Thinking courses at Stuffolk. (I know, Effective Thinking is possibly the worst title ever for a class, particularly a humanities course. The course is a lot more interesting than it sounds!)

And Lynda Barry's course syllabus, by the way, looks like this: 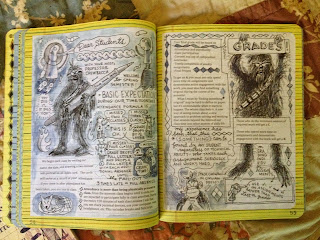 Anyway, she says some striking things about art-making and image-making, and when she speaks of images she's not just speaking of visual art or cartooning. In fact, I copied this down in my OWN notebook the other day because it struck such a chord with me:

"When someone learns to draw -- to render -- it's the first thing that goes -- the aliveness -- And it's what some artists spend their whole lives trying to get back."

If I think about my own attempts to render images through language, this feels very apt and true, and her exercises for her students are a deliberate attempt to remind them -- and herself -- that it's the act of image-making that's important. Far less so is the finished image; at least, to the artist herself.

So in the next few weeks I'm going to attempt to revise my Effective Thinking course based on the trial and error of this semester, and next time I teach it I'll probably introduce Lynda Barry into it much earlier than I did this time.

Also on the school-prep slate: doing all assignment prep, all reading notes, all exam questions and materials for ALL my fall courses so that, perhaps, my fall semester will be less stressful because I won't be simultaneously prepping AND attempting to grade at the same time.

AND I'm going to collaborate on a poetry video project with one of my colleagues at Stuffolk, something that will fulfill a faculty development grant requisite AND be a refreshing attempt at doing something new (while not completely outside of my wheelhouse).

These little projects -- the idea of them, before I've even begun -- are the things that have buoyed my spirits after the nastiness of last week. They don't compensate completely for the loss and the disappointment, but they bandage the wounds nicely (hide them, keep them from showing so clearly). And I know that as I become more involved in them, as they pull at my time and attention, I'll care less about the disappointment and feel more optimistic about everything in general.

ALSO happy-making: this personal essay by Sarah B. Boyle in The Hairsplitter that also doubles as a review of Fabulous Beast: The Sow. I had not an inkling that Boyle was writing such an essay or that it would even be published until she sent me a brief message yesterday indicating both. It's so thoughtful and eloquent and definitely made my day week.

Today is promising, too, however: I'm going to visit The Boy's first grade classroom as a Mystery Reader, and then take him out to lunch for some one-on-one time. Another good thing about no summer class -- more flexibility and time to do fun things with my kiddos.
Class Prep Fabulous Beast: The Sow Good News Lynda Barry Poetry Video Recommended Reading Sarah B. Boyle Summer Plans Syllabus The Hairsplitter