Day One, June 10, 2019:  Okay, I didn't follow my plan very well. I DID make it out of my home and to Starbucks but I didn't reread my play there. Nor did I read or revise any of the poems from the new manuscript. But I was productive. I submitted Fabulous Beast: Poems to a book festival, and then I revised a review and submitted it to a journal for consideration. These were necessary things. I consider today a warm-up for getting back in the game of writing every day.

Day Two, June 11, 2019: Rained-Out. (A joke. I had a sick kid at home. I know. In June. Jury's still out about whether or not she was actually sick.) I did manage to work on poems from my manuscript, but basically the end result was figuring out what I definitely DON'T want to do with my poems going forward. Not exactly time wasted, but I don't have much to show for today's work.


Day Three, June 12, 2019: Made it to the Starbucks without incident, and I even found a corner seat -- which is probably most convenient for writing without distraction. I started to revise my poems again, and settled into a beat-per-line form that will --  I think? -- work nicely. At any rate, it's making my language more tight & precise . . . again, "I think." Obviously, it's too early to say, because I'm reluctant to state anything definitively. But whatever. It's giving me a focus at the moment, and it feels like progress is being made.

Also, I've attempted giving these poems titles, which I'm far less confident about. One of the things I stress to my creative writing students is the importance of using titles, and yet when it comes to practicing this particular tenet I'm really awful. Also these titles might be really awful. Anyway. At least I'm trying. I can always strike them later.

Day Four, June 13, 2019: Worked from home today because I needed too many materials that I didn't want to drag into the coffee shop (books, notes, folders, etc.). Today was spent doing book promotion stuff -- not uncomfortable, humiliating, hey-can-you-throw-me-a-bone stuff, but follow up with editors at magazines where Fabulous Beast poems have been published. I spoke with almost everyone at AWP this year, but I didn't have any press release or official information to give them at that point. Now I do, though, so I spent the better part of the morning writing letters and attaching the press release and book cover and taking them up on their offers to spread the news about the book.

This is a very nice part of publishing and thus creating & maintaining a literary community -- people who are happy to spread your good news and treat it as their own good news (which it kind of is, since they were the first places to publish the poems).

Also I received an unsolicited invitation to read during the summer at a writer's conference, which is a bit of a milestone for me.

And -- not to get too braggy and boastful -- but I reread my revisions from yesterday and I suspect they don't completely suck.

Day Five, June 14, 2019: Did I say I liked those new drafts? Phbbbbtttt. I spent today reworking the original four, and then working on two more, and then trying to psych myself up for a third or fourth. But Starbucks was freezing, and I found myself distracted by ALL THE INTERNET THINGS, which is dangerous and I should probably get one of those internet-blocking apps for my laptop and ALSO probably lay off the coffee IF my absence of periods in this paragraph are any indication of what it does to me on an empty stomach.

But one of the good things about my internet distraction is that this morning I read this beautiful new/old poem by S.P. (I believe it was written a while ago, but it's something unpublished as of yet) and that restored a little bit of my faith in the poetry universe. NYRB is actually publishing long poems! NYRB is actually publishing poems! By someone I know who really deserves it!

Yeah, I should probably lay off the caffeine.

Anyway, now that I'm at the end of this really weird, kind of half-ass mini-sabbatical (I did NOT stick to my plan), I'm considering extending it. Like, I might try to take 2-3 mornings a week to escape the house, hole up in my corner at the coffee shop, and work on this manuscript OR MAYBE EVEN ONE OF THE PLAYS I KEEP TALKING ABOUT FINISHING.

Also I'm avoiding work email like a mofo. I know there are things I should answer in there. BUT. I. DON'T. WANT. TO.

Next week, I will have to. But for now -- I think I'll go read a little, and have lunch, and then use some of this coffee-fueled nervous energy to do something productive for my household, like fold laundry. Have I mentioned my house is back to disaster mode? Here is an actual picture of me & my homelife: 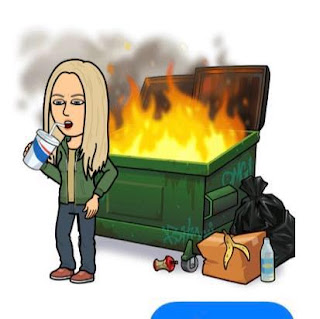 I mean, things could be better on this end. But we can't have everything, right?
Mini-Sabbatical Summer 2019 My Life as Dumpster Fire New York Review of Books Revision Starbuck Air-Conditioning is Monster Stephanos Papadopoulos Talking Talk but Not Walking Any Kind of Walk

Lissa Clouser said…
Congratulations on getting out of the house and getting work done! It may not have been as much work as you'd hoped/anticipated getting done, but you still did it. That's great! And it sounds like you accomplished some wonderful things during your mini-sabbatical. Best of luck as you keep working!
9:57 AM

sarah kain gutowski said…
Hi Lissa! Thanks for this note of encouragement. I hope your own writing is going well, too. :)
6:51 AM