Showing posts from August, 2018
Show all

Summer Stats and Cautious Optimism for the New Semester 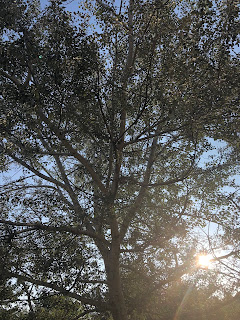 This is the last weekend of freedom before the new school year begins. I went into the office yesterday to clean it out -- there was so much junk stashed everywhere from last year's drop-and-run. I would come into the office with one pile of folders and books, place them on a desk or a table, and then pick up another pile of folders and books, and run off again. When I did work in the office it was often between columns of stacked files and assignments and general clutter.  I don't really want to do that again, if I can avoid it -- so I had a "purge day" wherein I went through all of the stacks and sorted through what needed to be filed and what needed to be recycled. When I left yesterday I had three or four boxes/bags of material to be recycled (which I'm doing at home because I don't trust that the school genuinely recycles -- I've watched our janitorial staff combine trash and recycling in the same cart and that's just suspicious  . . . I mea
Post a Comment
Read more 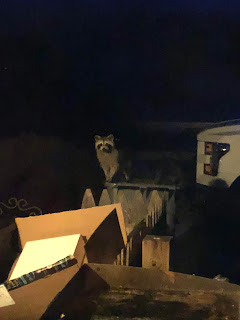 Since abandoning Effbook and InstaTimeSuck, I've been waaaaay out of the poetry-world drama loop. This has been a very good thing. Of course, sometimes I have twinges of Fear of Missing Out, but they are really, and somewhat surprisingly, few and far between. Also somewhat surprisingly, I've discovered that I like minding my own business. I did catch wind, however, of " that poem " published in The Nation in late July from fellow poetry bloggers, who have been more or less my one way of staying connected, however loosely, to the poetry world at-large (which is, ya know, still fairly small). I'm not going to rehash all of that here, but I thought that Kristy Bowen wrote a good meditation on crafting persona poems as a result, and so I'm sharing it here. August has begun its now-typical delivery of multiple rejections, as most of the awards and contests to which I submitted my manuscript earlier in the year (and one proposal to a conference-of-which-
Post a Comment
Read more 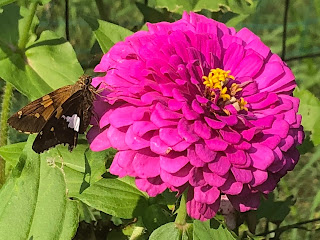 Grainy shot of my neighbor's zinnia. And butterfly. In the wake of Micro-Sabbatical Summer 2018, I've kept writing and done some small fine-tooth-comb type edits to poems that I've written this summer -- which happen to number FOURTEEN, if you're curious.  I know, I know, I'm just as shocked as you are.  My workspace in August, feat. coffee, sprinklers, bug spray, knee. I know that for other writers this isn't really a big deal, but I know also that there are some of you who understand this feeling -- this feeling of having been treading water for a really, really, really long time and then finally venturing toward some distant shore. The shore may be really far off in the fucking distance, but you're finally able to swim toward it. Maybe that's a lame and expected metaphor.  But I warned you -- I'm still rusty. Yesterday I met with M.S. and we shared with each other the work we've been attempting to eke out this summer, som
Post a Comment
Read more 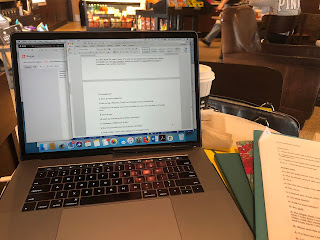 Monday: Wrote just over 1400 words of "Accountability Partners," a play I began writing in the summer of 2016 as part of the Stony Brook Southampton Script Development lab. BOOM! I now have three complete scenes. If I accomplish nothing else this week, I will have had these three hours in the Starbucks off the service road of the Sunrise Highway. Living the dream, people. Tuesday: Ermagherd, peeps. Just over 1000 words today. Not that 1000 words really means anything significant. I'm not exactly aiming for word length with this play. But I'm thinking of word length in terms of commitment. Another three hours of concentrated work on the play today. And another three hours of sitting in a Starbucks. I'm cold and full of coffee and my teeth are on edge between the air-conditioning and the caffeine in my system. But I wrote! And I have another scene! Maybe I'll actually keep it! Who knows! So many exclamation points!! A noisy-ass coffee shop is the mos
Post a Comment
Read more
More posts