Showing posts from February, 2017
Show all

On Writing, AWP 2017, and, Once Again, Over-Obligation 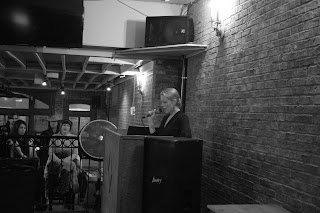 The writing is slow-going but it's chugging along. Since the new year I've written maybe two or three things I consider poems and generated a lot of scribbling in my notebook, which is kind of a big deal for a girl who hasn't worked on much of anything for the past few months. It feels even more strange and auspicious because those poems are something separate and apart from my verse play project, which -- as readers of this blog well know -- has kind of consumed my attention for the past few years. I'm not putting aside the play, either -- I'm still working on it. I'm just being flexible with my writing schedule, allowing that some mornings I'm moved to write about things other than these characters and this conflict and this particular time period. And at least I've been consistent and, well, persistent -- so far, I've kept up my writing routine of approximately 45 brief minutes every morning, in the wee hours before anyone else in the house
Post a Comment
Read more
More posts