On Putting It Out There

- May 16, 2013
Get yer minds out of the gutter, folks! "It" refers to one's self, one's consciousness, the essential voice that one shares with the world when one publishes a poem, or an essay, or an article -- or an essay on poetry printed in a journal, such as this one by my friend Stephanos Papadopoulos in the Los Angeles Review of Books last week.

I love this essay. It's beautifully written, introduces me to poets I was not familiar with previously, and speaks to an issue that's timely and relevant. Also, and more importantly, I think it does what an essay should do, which is similar to a function of poetry: to raise a question that weighs on the mind of the writer, to reflect on that question, to explore that question. It may or may not answer that question, but you follow the writer's process as he or she thinks. (This idea -- of the essay as a mode of thinking -- is the most difficult to teach in Freshman Comp.)

Of course, as I said above, the author is my friend so I may be a little biased. In the past week, however, this article has kept popping up all over the place -- so, perhaps, I'm not the only one who admires it.

First, there was this: 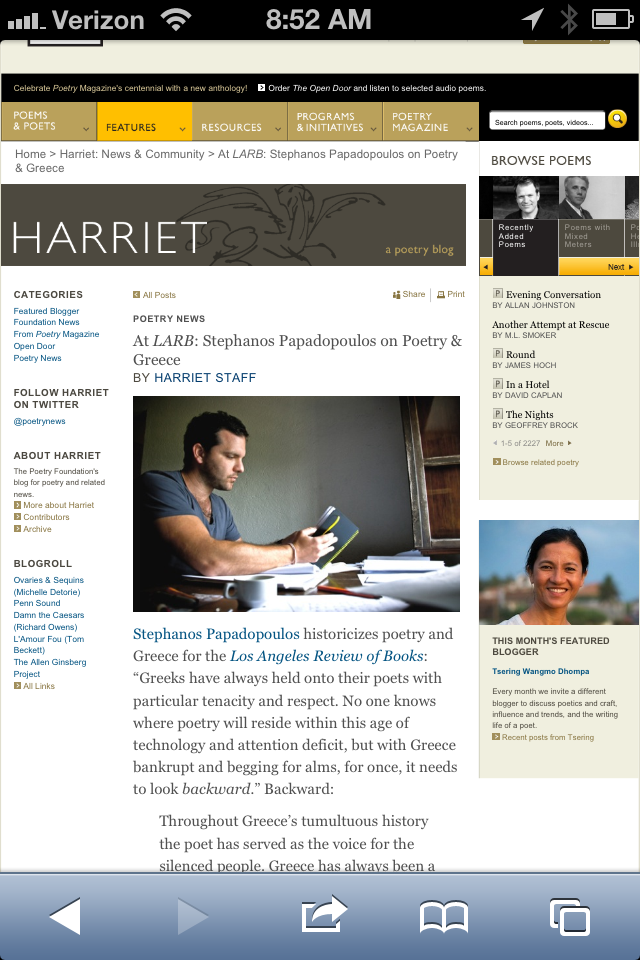 And then this mention, which I almost missed at the bottom of the Boston Review newsletter: 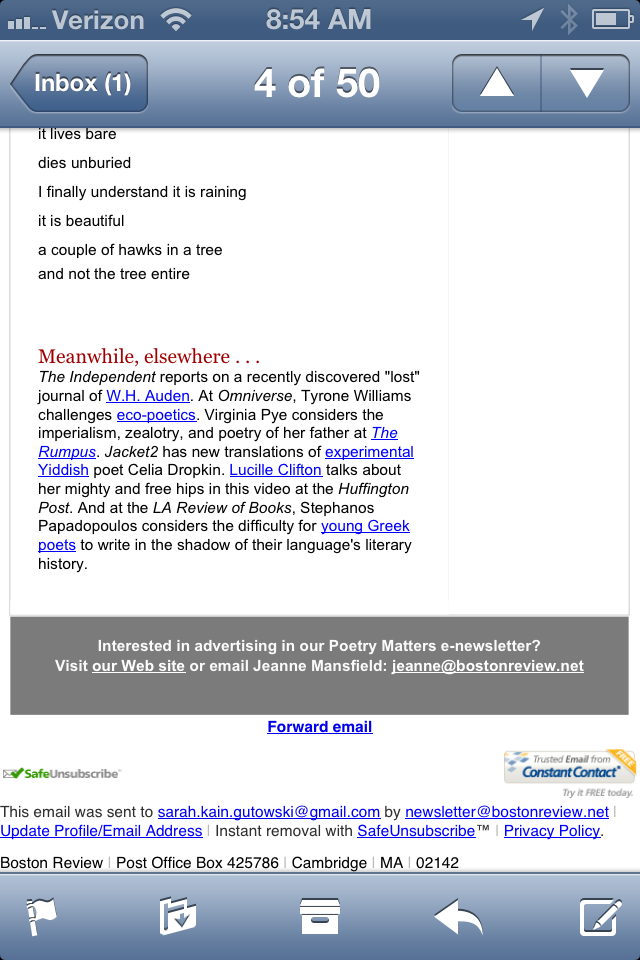 So, you know, maybe my taste in essays isn't suspect! (Or maybe these just prove that it IS suspect. Hmmm . . .)

ANYWAY, usually the best essays, like the best poems, end with a kind of jumping off point for further discussion. S.P.'s essay is written in sections, and each section begins with a question and then comes to a quiet summation -- nothing forceful or showy, but the author's sober insight about the role of Greek poetry in the past and at present. These insights are, naturally, based on the author's perception and so may be debatable depending on the perspective and experience of the reader, such as this one from the comments section of the LARB:

While I'm not sure I can agree with the point of view of a tourist when I've just read a an essay BY A GREEK CITIZEN AND SOMEONE WHO LIVES PART OF HIS LIFE THERE (!!!), at least this comment was put forth with some intention to engage in a conversation with the author and other readers. This next example gives the impression that the comment's author would like to engage in conversation, but he or she doesn't, really. He or she just wants to sound intelligent, so he or she bandies around some big-time-stuff vocab and essentially skirts any topic that the essay actually dealt with:
I love, love, LOVE, however, how "Working Class Poet" (note the irony between Working Class Poet's diction and his/her title? Isn't it charming? READ: IT'S NOT CHARMING) is more or less shut down by another reader who recognizes Working Class Poet's game:

Working class poet • 6 days ago  • This essay makes it clear that the translation of poetry practices in Greece for an international audience only reproduces hegemonic practices of poetry within Greece (with all the rewards that this positioning provides). Can we imagine an alternative telling?

And then there's the guy who doesn't really want to engage in any kind of conversation, even the appearance of it -- he just wants to promote his own work:

*Groan* This guy wants to talk at you, not with you.


I have such a love-hate relationship with the comments section in the online world. I cannot read the comments section of most news outlets. One can only take so much vitriol and stupidity. The comments section of online publications like the LARB are usually filled with far less vitriol and stupidity, but as we can see, even the LARB has its off days. I love hearing what other people, other readers (THOSE ITALICS ARE DIRECTED AT YOU, YANNIS LIVADAS) have to say about articles -- particularly when they introduce an idea or concept or opinion I hadn't considered before. Sadly, though, such comments are few and far between.

And so it strikes me as an act of bravery to publish in the online world -- to, essentially, put yourself out there. Not in blogs, like this one, because such blogs have a small and limited readership (usually) and that's like preaching to the choir (Heeeey, choir! What's up, my peeps?). But in online publications that have a wide, diverse readership -- to print is to be very brave. Particularly when one is writing about issues close to the heart . . . because any jackass can comment, and comment anonymously, and in some cases, carelessly and viciously.

Sometimes I wonder if that's why I've dragged my feet on so many writing projects, and most particularly, non-poetry writing projects, in the past. Because I lack that kind of courage. Nevermind that there's no guarantee I'd ever see those projects published -- but just the idea of presenting my thoughts to others, my arguments, which I've always been incredibly self-conscious about -- makes me freeze up when it comes to the act of writing. The idea of seeing others react, and not just in a negative way, but in a way that tears apart or destroys my argument, terrifies me into stasis. I'm afraid, admittedly, of being told there's a flaw in my thinking.

Why is that? I mean, so what? What is so devastating about being wrong? Maybe it has something to do with traumatic grade school experiences (not that I can think of any, offhand). Maybe it has something more to do with a graduate school experience (which I can remember, quite vividly, thank you very much). Graduate school was probably too late in the game, however, and that experience is too easy a target. I think this fear was formed earlier than my mid-twenties. Anyway, psycho-analysis of myself is boring -- but I think the first three questions of this paragraph are interesting.

I mean, it's obvious to say that often we feel attacked when someone criticizes or attacks the product of our intellectual efforts, particularly if we build our identity around those efforts (as opposed to, say, a Kim Kardashian type, who clearly builds her sense of identity with something different). (Sorry K.K. You're an easy target. And I haven't had enough caffeine to think of a less-easy target.) (Less-easy . . . damn. Sorry again, K.K.) 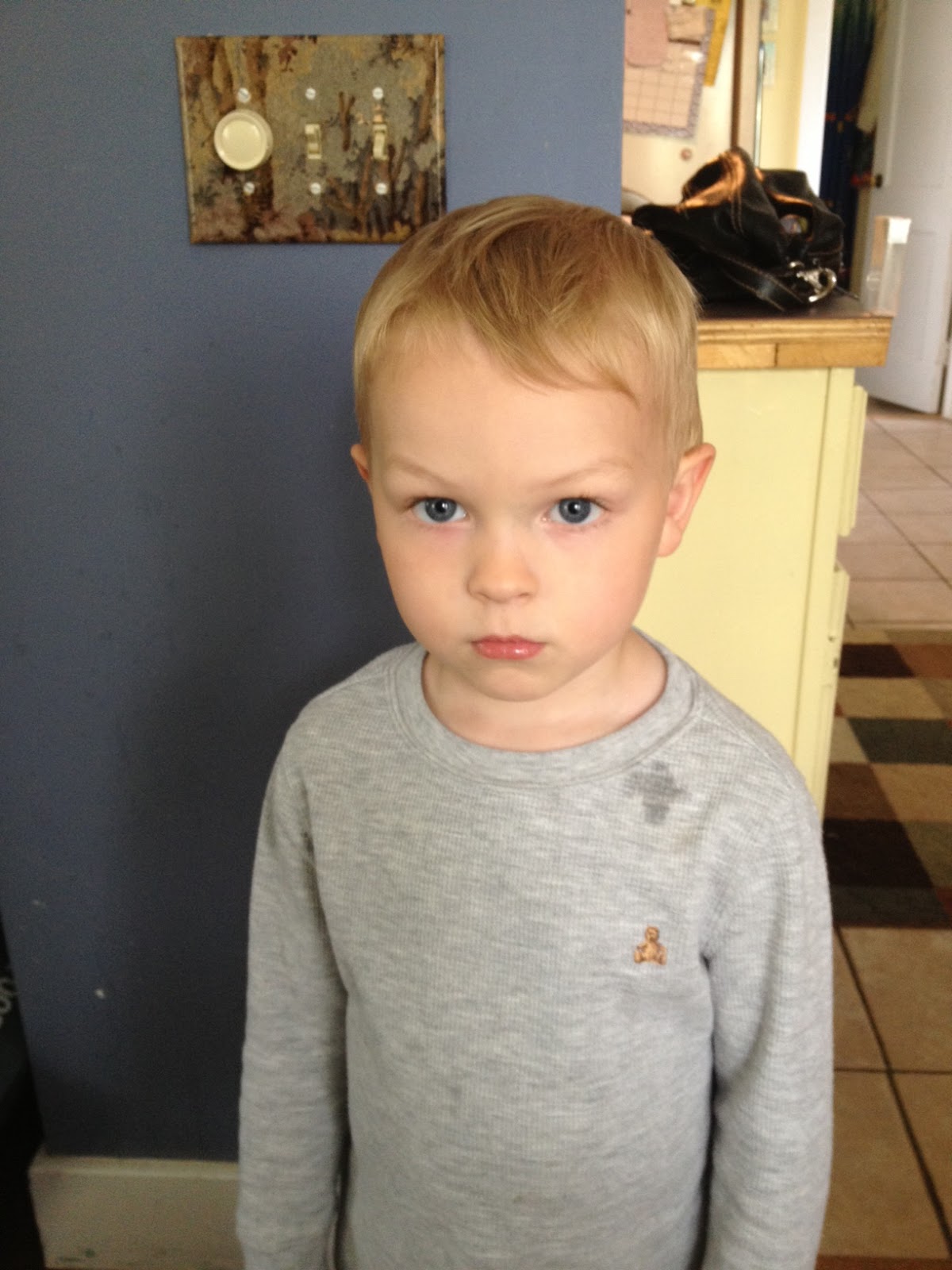 Questions to end with. Questions to begin a new blog post with. Sadly, some other time -- the boy and the baby demand some attention now. (I've been a writing hog today and pushed my luck. The boy is MAD. As you can see from the pic on the right. The baby has been sleeping.)

Γιάννης Λειβαδάς / Yannis Livadas said…
Dear user; i posted a link not in your page but in the page where you discovered it. Not so? am i mistaken? I do not remember well? In any case, the text, (part of an extended essay) examines one of the aspects, one of the possibilities, concerning the greek poetry as it has appeared the last three or so decades. It has nothing to do with me, with my personal views and moreover it does not promote any person (me), publisher, book or group. That is, your reaction had nothing to do with some sort of ideas (which are not known to me anyway) or any of your views on a subject. I hope someday to be able to consider the difference between a challenge for an open and rather creative dialogue and a pointless reaction based on facts that obviously have nothing to do with poetry or poetics. P. S. That portion of the essay is yet to receive an organic, that is, serious responce. Which is a fair and declarative thing. Yet my email always welcomes interesting replies. Best regards.
5:32 PM

sarah kain gutowski
Sarah Kain Gutowski is a Professor of English at Suffolk County Community College on Long Island, where she lives with her husband, three children, and large, goofy dog. She is the author of Fabulous Beast (forthcoming, Texas Review Press, 2019) and Fabulous Beast: The Sow (Hyacinth Girl Press, 2013). Her poetry has been published in Painted Bride Quarterly, Stirring: A Literary Collection, Verse Daily, The Gettysburg Review, The Southern Review, Epiphany, The Threepenny Review, and So to Speak: A Feminist Journal.